Location of the Nerissa Sinking using Radio Messages and Co-ordinates

The calculation program gives a distance to the northwest of 107 miles from Aran Island and 109 miles from Bloody Foreland which are the two closest points of Donegal. 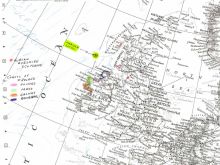 HMS Hurricane was a Royal Navy Havant class destroyer. Hurricane was launched on 29 September 1939 and sunk by U-415 on 24 December 1943. At the time of the sinking of the Nerissa, Hurricane (Lt.Cdr. H.C. Simms, RN) was at sea having rescued 3 survivors of the “Henri Mory” torpedoed off Blaskett Island, Ireland (54° 21 N 19° 30 W) on 28 April and then on 29 April rescued the master, 170 crew members, eight gunners and 273 passengers from the British steam passenger ship City of Nagpur which was sunk in position 52.30N, 26.00W by the German submarine U-75. The survivors were landed at Greenock.

HMS Lincoln was the overaged (1918) US destroyer USS Yarnall turned over to the Royal Navy in Oct. 1940 and stationed at Londonderry. She escorted convoys in and out of the Western Approaches to mid-ocean. In Feb 1942 she was turned over to a Norwegian crew and saw duty operating on escort duty between Halifax, NS and St. John’s, Nfld. In July 1942 she became HMCS Lincoln still with the Norwegian crew. In late 1943 she returned to the UK, and was placed in reserve in the Tyne River and later that year transferred to the Russian Navy for parts.

HMS Kingcup was a Royal Navy Flower class corvette (1940). She was later known to have escorted convoys across the Atlantic Ocean. She survived the war.

HMS Veteran was a Royal Navy Admiralty V & W class destroyer (1919). On May 1, 1941 under Cdr. W.T. Couchman, OBE she picked up 83 survivors from the British passenger ship Nerissa that was torpedoed and sunk by the German submarine U-552 southeast of Rockall in position 55.57N, 10.08W. [JMC Note: Location differs from that given in radio messages at the time.] On 27 September 1942 HMS Veteran (Lt.Cdr T.H. Garwood, RN) was torpedoed and sunk by U-404 in position 54º 34’N, 25º 44’W while escorting convoy RB-1. When torpedoed she was rescuing survivors of the American passenger ship New York. She was lost with all hands together with rescued survivors from the American passenger ships Boston and New York. The convoy was attacked by three wolf packs totalling 17 U-boats.

Whitley was the Armstrong Whitworth Whitley two-engined long-range bomber (designed 1934) that was also used by RAF Coastal Command for extended patrols over the Atlantic. On those patrols they carried bombs to be used on U-boats.